The arc is generated when the two terminals are taken very close to each other and maintaining a gap of 2-4 mm between them.Due to which the air present in this gap gets ionised and the flow of current started from the ionised gas.But at the same time this ionised gas offers very high resistance to the flow of current and so the huge amount of heat is generated.Hence the temperature is of the order of 6000°C to 7000°C.

In arc welding we can use both type of current i.e. AC as well as DC.

Here we generally preferred DC current because it requires low voltage than AC.In AC current very high voltage is required because in every cycle current reaches to zero.

A.) In anode and cathode,electrode comes out from cathode and strikes on the anode.So the heat developed on the anode is always greater than cathode.

B.) For welding thick plates more heat is required and so we make the plate i.e. workpiece as anode and welding rod as cathode.

DC current is also called constant current. Here positive and negative terminals are always fixed.As we know that the heat developed on anode is more than the cathode,so while working with DC current we will take care of polarity.

* Straight polarity is used for thick plates and deep weld.

* Reverse polarity is used for thin and shallow weld.

* Filler rod used for ferrous metal- For this we use high carbon contain steel rod which is also called silicon manganese rod.

Types of arc welding depending upon the type of electrode

In case of unshielded arc welding filler rod without flux is used and so here the problem of blow holes on the weld surface is common because molten metal reacts with oxygen.

If the welding rod is coated with flux then it is called shielded type arc welding. Sometimes we also used inert gas for shielding.Here there is no problem of blow holes because shielding keep the oxygen away from the weld.

If more temperature will be developed on graphite electrode then there is a chance that some carbon particles will release from graphite electrode and settle down on workpiece at the weld.Due to which the hardness of the workpiece is increased.Here we give current between 20 to 80 ampere depending upon the thickness of plate.

* HAZ ( Heat Affected Zone)- The region enclosed to the weld is called heat affected zone because this region is affected from the heat of welding.In HAZ there is a change in micro structure as well as there is change in colour comparing to base metal.

In metal arc welding arc is generated in between the metal electrode and the workpiece.Here the temperature produced is about 2400°C on the negative terminal and 2600°C on positive terminal.

The length of the electrode is about 45 cm and it’s diameter varies between 1.5 to 10 mm. 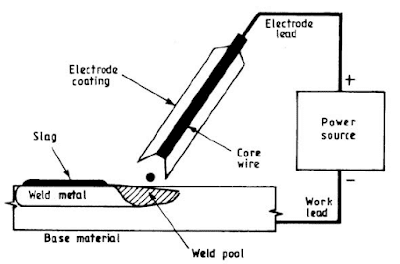 In MIG arc is generated between a consumable electrode and workpiece. The electrode is not coated with flux, so for shielding we use inert gases such as Argon and Helium. Sometimes Co2 is also used because it is less costlier.

* Here we used a current of 100 ampere to 400 ampere depends upon the speed of welding and diameter of electrode.

* The welding gun may be either air cooled or water cooled.

* The welding speed in MIG is high and can be used for welding aluminium, stainless steel.

Above figure shows TIG and MIG processes together.

TIG is almost similar method as MIG. Here the only major difference is that we use a non consumable electrode made of tungsten, so a additional filler rod is also used.

* TIG can weld most of the metal and used only if the plate thickness is less than 7 mm.

* In TIG generally we used AC current due to very small thickness of plate.

This welding technique is a combination of arc and resistance welding. First of all, arc is generated between consumable electrode (filler rod) and the starting plate. The heat developed from the arc melt the flux and form the slag. After that arc becomes finished and when electricity flow through the slag, it offers very high resistance to the flow of electricity due to which heat is developed which makes the slag always in molten state and always provide heat for welding.

* In this welding method welding heat is obtained from the slag.

* Combination of oxides of silicon, manganese, titanium and magnesium are used.

* The welding speed up to 1.5 m/min. is possible and used for the welding of thicker plate.

* The welding can be performed only in upward vertical direction.

This welding technique is fully automatic and welding speed is very high up to 5m/min. Here the consumption of flux is also very high. The flux is generally made of lime silica, manganese oxide and some other compounds. The arc is performed between consumable electrode and workpiece. The complete arc is at tip of electrode are submerged in a protective mineral powder i.e. flux which is used to separate the ambient oxygen from the weld. 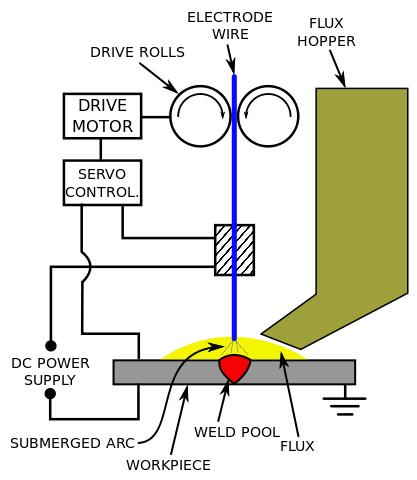 * This technique is not economical and only used for industrial purposes.

Plasma means ” ionised gas”. Here in this technique we used very high velocity ionised gas which is at very high temperature for welding. In this method we use two inert gases. One for shielding purpose and another one is used to make ionised gas. The arc is produced between a non consumable electrode and workpiece. High pressure arc will be supplied through the ceramic nozzle and it will produce plasma arc. The gases usually used are argon, helium or hydrogen. The plasma stream of ionised particle is passed through a small orifice of a welding torch and made to impinge on the area to be weld. The plasma arc welding provides a deep penetration, faster welding, narrow bead and less HAZ. 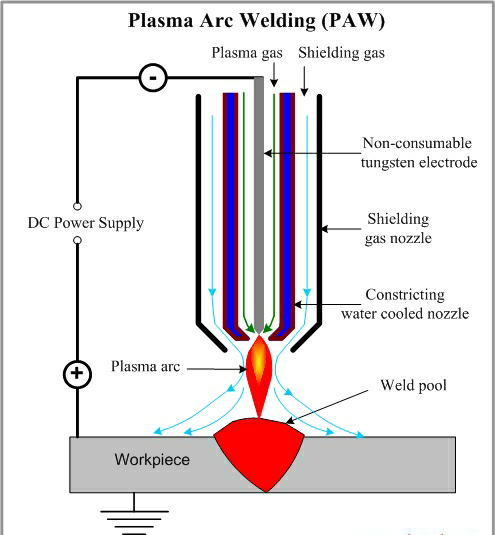 * The temperature of the plasma gas is generally about 1100°C. But it may be up to 3300°C which is its maximum value.

* This technique is very expensive and can be used for welding as well as for cutting. It is generally used for welding titanium, cobalt, molybdenum and it’s alloys in aerospace industry, jet engines and for turbine blades.

In this method we used two tungsten electrode and arc is generated between these two tungsten electrodes. From the arc a stream of hydrogen is passed and by taking heat from the arc, hydrogen gets broken into atomic form but when this gas moves away from the arc hydrogen recombine to form hydrogen gas molecules. During this process huge amount of energy is liberated and temperature about and temperature obtained about 4000°C. This excess energy is used for welding.

* Here the hydrogen itself work as shielding gas.

That was all about Arc welding processes and their fundamental of operations. Hope you all like this article. If you have any doubts regarding any mechanical engineering topics then let us know in comment section or contact us through email.