1.) Radial bearings- In radial bearings load acts perpendicular to the direction of motion of the moving element.

Here we will discuss detailed analysis of sliding and rolling contact bearings.

The sliding contact bearings, according to the thickness of layer of the lubricant between the bearing and journal may be classified as follows:

The materials commonly used for sliding contact bearings are babit metal (tin base and lead base babits), bronzes (gunmetal and phosphorus bronzes),cast iron, silver, carbon graphite, rubber, wood and plastics. The following properties must be considered in selecting the best material.

2.) Fatigue strength- The bearing material should have sufficient fatigue strength so that it can withstand repeated loads without developing surface fatigue cracks.

3.) Conformability- It is the ability of a bearing material to accommodate shaft deflections and bearing inaccuracies by plastic deformation (or creep) without excessive wear and heating.

4.) Embeddability- It is the ability of a bearing material to accommodate or embed small particles of dust, grit etc. without scoring the material of the journal.

5.) Bondability- Many high capacity bearings are made by bonding one or more thin layers of a bearing material to a strength steel shell. Thus the strength of bond i.e. bondability is an important consideration in selecting bonding materials.

6.) Corrosion resistance- The bearing material should not corrode away under the action of lubricating oil.

A hydrodynamic journal bearing is Shown in figure. 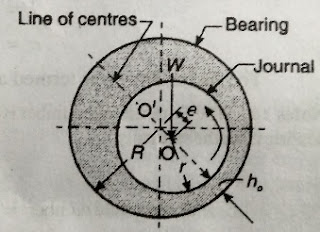 1.) Diametral clearance- It is the difference between diameters of the bearing and the journal.

2.) Radial clearance- It is the difference between radii of the bearing and the journal.

5.) Minimum oil film thickness- It is the minimum distance between the bearing and the journal under complete lubrication condition. It is denoted by Ho and its value may be assumed as one – fourth of diametral clearance.

* When l=d, then the bearing is called square bearing.

* The value of l/d may be taken as 1 to 2 for general industrial machinery.

* In cranck shaft bearings, the ratio of l/d is frequently less than 1.

1.) Low starting and running friction except at very high speeds.

4.) Low cost of maintenance, as no lubrication is required while in service.

5.) Small overall dimensions and are easy to mount or erect.

4.) Design of bearing housing is complicated.

The rolling contact bearings are generally of the two types;

The ball and roller bearings consists of an inner face which is mounted on the shaft or journal and an outer race which is carried by the housing or casing. In between the inner and outer race there are balls or rollers. A number of balls and rollers are used and these are held at proper distances by retainers so that they do not touch each other. The retainers are thin strips and is usually in two parts which are assembled after the balls have been properly spaced. The ball bearings are used for light loads and the roller bearings are used for heavier loads. 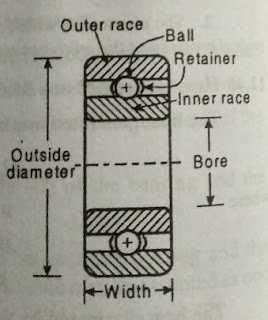 The most common Ball bearings are available in four series as follows;

* The extra light and light series are used where the loads are moderate and shaft sizes are comparatively large and also where available space is limited.

* The medium series has a capacity 30 to 40 percent over the light series.

* The heavy series has 20 to 30 percent capacity over the medium series. This series is not used extensively in industrial applications.