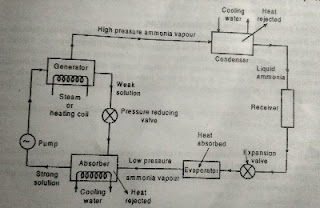 In vapour absorption refrigeration system the the compressor is replaced by-

The C.O.P. of a vapour absorption system is given by

Where, Tg= Temperature at which heat is given to the generator

Te= Temperature at which heat is absorbed in the evaporator

The main of domestic electrolux refrigerator is to eliminate the pump so that in the absence of moving parts the machine becomes noise less. This type of refrigerator is also called three fluids absorption system. The three fluids used in this system are ammonia, hydrogen and water. The ammonia is used as a refrigerant because it possesses most of the desirable properties. The hydrogen being the lightest gas,is used to increase the rate of evaporation of the liquid ammonia passing through the evaporator. The hydrogen is also non corrosive and insoluble in water. The water is used as a solvent because it has the ability to absorb ammonia readily.

The C.O.P. of this type of refrigerator is given by the ratio of heat absorbed in the evaporator to the heat supplied in the generator.

NOTE- Since water is used as a refrigerant in this system,hence the refrigeration temperature must be kept above the freezing point of water.

Properties of a refrigerant :

A good refrigerant should have following properties.

8.) Easy to liquify at moderate pressure and temperature

9.) Easy of locating leaks by odour or suitable indicator

1.) R- 11(CCl3F) ; It is stable, non flammable and non toxic. It is considered to be a low pressure refrigerant. It has a low side pressure of 0.202 bar at -15°C and high side pressure of 1.2606 bar at 30°C. The latent heat at -15°C is 195 kj/kg. The boiling point at atmospheric pressure is 23.77°C. Due to its low operating pressures, this refrigerant is exclusively used in large centrifugal compressor systems of 200TR and above. The leaks may be detected by using a soap solution,a halide torch or by using a electronic detector. The cylinder colour for this refrigerant is orange.

2.) R-12(CCl2F) ; It is a very popular refrigerant. It is a colourless and almost odourless liquid with boiling point of -29°C at atmospheric pressure. It is non toxic, non corrosive, non irritating and non flammable. It has relatively low latent heat value which is an advantage in small refrigerating machines. The refrigerant is used in many different types of industrial and commercial applications such as refrigerators, freezers, water coolers, room and window air conditioning units.

3.) R-22(CHClF2); It has also been successfully used in air conditioning units and in household refrigerators. It is used with reciprocating and centrifugal compressors. It is not necessary to use R-22 at below atmospheric pressure in order to obtain the low temperatures.

That was all about the Vapour absorption refrigeration system. Hope you all like this article. If this was helpful to you then share this article with your well wishers. If you have any doubts regarding this or any mechanical engineering topics then let us know in comment section or contact us through email.