A thermodynamic cycle or a cyclic process consists of a series of thermodynamic operations or processes.
When the operations or processes of cycle are plotted on P- V diagram,they form a closed figure, each operation being represented by its own curve.
Since the area under each curve gives the work done to some scale, during each operation.Therefore it follows that the net work done during one cycle will be given by the enclosed area of the diagram as shown in figure below: 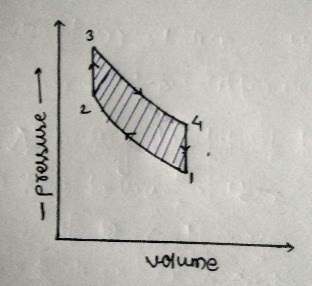 A thermodynamic cycle(1-2-3-4)
Otto cycle ( petrol engine)
The study of various thermodynamic cycles is very essential for the power developing system ( such as petrol engine, diesel engine,gas turbine etc.). These engines use a mixture of fuel and air for their operations.
Since the mass of fuel used,as compared to mass of air is very small, therefore the mixture may be assumed to obey the properties of perfect gas.
Note-
When air is assumed to be working substance inside the the engine cylinder,the cycle is called as an air cycle.

The analysis of thermodynamic cycles or air cycles is based on the following assumptions:
1.) The gas in the engine cylinder is a perfect gas,i.e.it obeys the gas laws and constant specific heats.
2.) The physical constants of the gas in the  engine cylinder are same as those of air at moderate temperature.
3.) All the compression and expansion processes are adiabatic and they take place without any internal friction.
4.) Heat is supplied by bringing a hot body in contact with the cylinder at appropriate points during the process.Similarly heat is rejected by bringing a cold body in contact with the cylinder at these points.
5.) The cycle is considered to be closed one and the same air is used again and again to repeat the cycle.
6.) No chemical reaction takes place inside the engine cylinder.

A thermodynamically reversible cycle consists of reversible processes only.
As we know a reversible process is one which is performed in such a way that at the end of the process,both the system and the surroundings may be restored to their initial States.
For example consider a process in which the system (gas) is expanded from state 1 to 2 following the path 1-2 as shown in figure.

Reversible process
Let during the thermodynamic process 1-2,the work done by the system is W1-2 and the heat absorbed is Q1-2.
Now,by doing the work (W1-2) on the system i.e. by compressing the gas and extracting heat (Q1-2) from the system,we can bring the system and the surroundings back to state 1(initial State).
Thus following the same path 2-1,the process is said to be a reversible process.
In a reversible process there should not be any loss of heat due to friction, radiation or conduction etc.A cycle will be reversible if the processes constituting the cycle are reversible.Thus in a reversible cycle the initial conditions are restored at the end of the cycle.
Following are the conditions for reversibility of a cycle:
1.) The pressure and temperature of the working substance must not differ, appreciably from those of the surroundings at any stage in the process.
2.) All the processes, taking place in the cycle of operation,must be extremely slow.
3.) The working parts of the engine must be friction free.
4.) There should be no loss of energy during the cycle operation.
Note- A reversible cycle should not be confused with a mechanically reversible engine.Steam engine cranks may be made to revolve in a reversed direction by mechanically altering the valve settings.But it doesn’t reverse the cycle,on which it works.
A two stroke petrol engine may be Made to revolve in reverse direction by altering the timing of ignition.But this also doesn’t reverse the actual cycle.

1.) Isothermal and adiabatic processes-
Generally in actual practice complete isothermal and adiabatic operations are not achieved.However,they can be approximated.
The simple reason for the same is that it is impossible to transfer heat at a constant temperature in case of an isothermal operation.
Moreover,it is also impossible to make an absolutely non conducting cylinder in case of adiabatic operation.
In actual practice,an isothermal may be approached if the process is so slow that the heat is absorbed or rejected at such a rate that the temperature remains practically constant.
Similarly,an adiabatic operation may be approached if the process takes place so quickly that no time is given to the heat to enter or leave the gas.
From the above, conclusion is that the isothermal and adiabatic processes are reversible processes.
2.) Constant volume, constant pressure and constant PV^n processes-
We know that when the temperature of the hot body, supplying the heat, remains constant during the process,the temperature of the working substance will vary as the operation proceeds.
In view of this these three operations are irreversible processes.But these can be made approximate to reversibility by manipulating the temperature of the hot body to vary(by regenerator),so that at any stage the temperature of the working substance remains constant.
In this way, constant volume, constant pressure and constant PV^n processes are regarded as reversible processes.
3.) Free expansion and throttling process-
These processes are irreversible,as there is always a loss of heat due to friction when the working substance passes through the orifice.

Relation between cycle and engine:

In the study of basic theory of a heat engine,it is assumed that the working fluid is used again and again in the cylinder.
We say that the fluid has undergone a cycle, when it passes through different processes and returns back to its original state.
As a matter of fact,the working fluid in an actual engine doesn’t go through a complete cycle and operates on an open cycle.
But for the purpose of simplicity in analysis,we study the closed cycle i.e. ideal cycle, which closely approximates with the open cycle.

1.) Cylinder bore-
The inner diameter of the cylinder,in which the piston moves is known as cylinder bore.
2.) Stroke length-
The piston moves in the cylinder due to rotation of crank.Its extreme positions are known as Top Dead Center (T.D.C.) and Bottom Dead Center (B.D.C.).The distance between these two extreme positions is known as stroke length or simply stroke.
3.) Clearance volume-
The volume occupied by the working fluid when the piston reaches the top dead center,is known as clearance volume.
It is denoted by Vc.
4.) Swept volume-
The volume swept(covered) by the piston when it moves between two extreme positions i.e. T.D.C. to B.D.C. is known as swept volume.It is also called as displacement volume or stroke volume.It is denoted by Vs.
Mathematically,
Vs= piston area× stroke length
= π/4 × d^2 × L
d= cylinder bore.
5.) Total cylinder volume-
The volume occupied by the working fluid when the piston is at bottom dead center,is known as total cylinder volume.
Mathematically it is equal to clearance volume and swept volume.
i.e. V= Vc+ Vs
6.) Compression ratio-
The ratio of total cylinder volume to the clearance volume is known as compression ratio.It is denoted by r.
Mathematically,
r= Vc+Vs/ Vc
7.) Mean effective pressure-
It is defined as the constant pressure acting on the piston during the working stroke.It is denoted by Pm.
Mathematically,
Pm= Work done/ stroke volume.
That was all about the thermodynamic air cycles. Hope you all like this article. If this was helpful to you then share this article with your well wishers. If you have any doubts regarding this or any mechanical engineering topics then let us know in comment section or contact us through email.
Some images used in mechanical talks is taken from the licensed photo section of Google. We are not taking any kind of credit for all those images
Spread the love