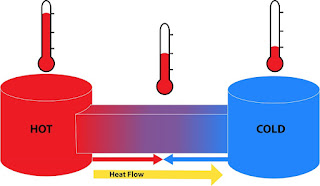 The second law of thermodynamics can be defined in different ways but the two most popular statements are well known everywhere which are given by two scientists. These are as follows:

According to Kelvin – Planck, “It is impossible to construct an engine working on a cyclic process, whose only purpose is to convert heat energy from a single thermal reservoir into an equivalent amount of work”. In other way we can say that no actual heat engine, working on a cyclic process, can convert whole of the heat supplied to it into mechanical work. It means that there is a degradation of energy in the process of producing mechanical work by the heat supplied. Thus by the above explanation we can conclude that the Kelvin- Planck statement of the second law of thermodynamics is also known as the law of ‘degradation of energy’.

A heat engine which violates the above statement of the second law of thermodynamics is known as perpetual motion machine of second kind ( briefly written as PMM-2 ). This machine simply disobey the Kelvin- Planck statement having work like a heat engine which converts whole of the heat energy into mechanical work which is impossible to obtain in actual practice. Because in real case no machine can convert whole of the heat energy supplied to it, into equivalent amount of work. Thus the perpetual motion machine of second kind is known as 100 percent efficient engine which is also impossible. 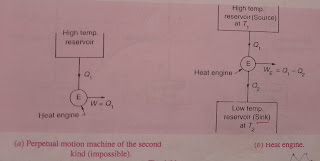 a.) The ratio of maximum mechanical work obtained to the total heat supplied to the engine is known as “maximum thermal efficiency”. Mathematically,

b.)  A thermal reservoir is a body of infinite heat capacity which is capable of absorbing or rejecting an unlimited quantity of heat without affecting its temperature.

c.)  A perpetual motion machine of the second kind ( PMM 2 ) does not violate the first law of thermodynamics as such a machine would not create or destroy energy.

In other manner we can say that, heat can’t flow itself from a cold body to a hot body without the help of other external energy or mechanical work.

The device such as a refrigerator or a heat pump, violates the Clausius statement because no input work is supplied to the device to transfer heat from from a cold body to a hot body. This type of device is also called as perpetual motion machine of the second kind.

In order to achieve the object of transferring heat from a cold body to a hot body, the refrigerator and a heat pump, while operating in a cyclic process require an input work as shown in above figure. Though there is no difference between the cycle of operations of the refrigerator and a heat pump. Both mostly achieve the same level of performance in terms of objective but the basic purpose is quite different. 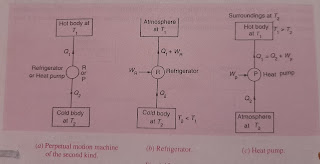 On the other hand, a heat pump is a device which works on a cyclic process which maintains the temperature of the hot body i.e. heated space at a temperature higher than the surroundings temperature.

The performance of refrigerator and heat pump is measured in terms of coefficient of performance ( C.O.P. ) which is defined as the ratio of the maximum heat transferred i.e. refrigeration effect or desired effect to the amount of work required to produce the desired effect. Mathematically, for refrigerator,

That was all about the second law of thermodynamics and it’s limitations. Hope you all like this article and it would provide some knowledge to you. If you have any issues regarding to this, then feel free to contact us via email.

You may also read this:-

Some images used in mechanical talks is taken from the licensed photo section of Google. We are not taking any kind of credit for all those images
Spread the love