Casting is the basic or primary manufacturing process. It is generally known as the oldest process of manufacturing. It is a process in which molten metal is allowed to form predefined mould material.
Here first of all an impression is formed in the damped sand with the help of a tool called ‘pattern’.There after this pattern is removed as a result of which a cavity is formed. This cavity is fulfilled by the molten metal and allow to solidify such that it forms a replica of pattern called “casting”.

It is a setup in which an impression or cavity is formed in damped sand with the help of a pattern and moulding box.

It is the principle tool during casting process. Basically it is a model or replica of the final object.

For making a pattern we use different types of material such as wood, metal, plaster of Paris, plastic and rubber and wax.
Wood patterns-
* Wood is the common and basic material for pattern. Basically Teak wood is used for making pattern.
* There are some problems with wood, as it absorbs the moisture during rainy season and removes the       moisture during summer season. So it is affected by moisture and it’s dimensions changes regularly.
* Wood patterns are used for few casting only. In case of mass production we use metal pattern.
Metal patterns-
* We used different types of metals such as cast iron, brass and aluminium for making pattern.
* In case of cast iron there is a problem of corrosion due to moisture whereas in case of brass there is         no  such problem of corrosion but its a bit heavy.
* In case of aluminium the above two problems can be removed and so aluminium is the best metal for     pattern.
Plastic and rubber patterns-
* Plastic is called modern pattern material because it is strong, dimensionally stable.It do not absorb         moisture.It can be shaped easily and have a smooth surface.
* Epoxy resin and polystyrene foam are generally used for making plastic pattern.
* Silicon rubber is also used for making pattern.
Plaster of Paris-
Plaster of Paris is basically a gypsum cement having good compressive strength.
It takes different types of shapes easily, so it is used as pattern material.
Wax–
Wax is the important pattern material and used for making pattern in investment casting.Generally paraffin wax is used for making pattern material. 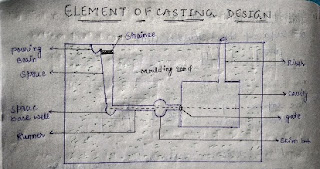 * Flask
Moulding flask is also called moulding box.
It is generally made of wood.It has three parts. The upper moulding flask is called cope. The middle moulding flask is called cheek and the bottom most moulding flask is called drag.
* Parting line
This is the dividing line between two moulding flask. It generally works as a separator for for cope and drag.
* Pouring basin
It is funnel shape type cavity at the top of the mould in which molten metal is poured.
* Sprue
It is a passage of reducing cross section area through which molten metal enters into the cavity. It also control the flow of molten metal.
As the molten metal moved downward it’s velocity increases because of reducing area,
while pressure decreases i.e. low pressure created. Hence atmospheric gases absorb inside and it mix with molten metal. This process is called ” Air Aspiration Effect “.
To avoid this effect the idle shape of sprue is parabola.But in actual practice we use a tapper cylindrical shape sprue.
* Runner
It is a horizontal passage in the parting plane through which molten metal reaches to cavity. It helps in making the flow smooth i.e. removes turbulency.
* Skimbob
Skimbob helps in removing impurities. The impurities which are lighter rise up, while the impurities which are heavier get settled down in the skimbob such that only pure metal goes to the cavity.
* Riser or feeder
It is the passage of sand, made in the coke to
permit the molten metal to rise above the highest point in the casting after the mould cavity is filled up.
The main function of riser is to compensate the required molten metal in casting during liquid shrinkage and solidification shrinkage.
It also allows the escape of steam or gases from the mould cavity.
It also helps the workers to observe that the cavity is completely filled up or not.
Notes on riser-
; Whenever molten metal gets solidify, it get shrink because its volume decreases after solidification. To compensate this decrease in volume riser helps and it provide the molten metal to the cavity for compensating due to shrinkage.
; Riser will compensate for shrinkage only if the molten metal in the riser will solidify later than the cavity.
For this, volume to surface area is an important parameter. If the volume to surface area is ratio is more then the rate of cooling will be less.
Here, Ts= K.(V/S.A.)^2
Ts= solidification time.
The volume to surface area ratio is maximum for sphere, so the idle shape of riser is sphere. But because of difficulty in moulding, we use cylindrical shape riser.
TYPES OF RISER
Generally there are two types of riser used.
A.) Open or top riser.
B.) Side or blind riser.
The open riser is simple and easy to made on the casting. So it is mostly used.
In case of blind riser which is completely surrounded by sand, it is difficult to made as compare to open type. But the efficiency of blind riser is more as compared to open riser because in blind riser the rate of cooling is slower as compared to open type.
Gate or Ingate
It regulates the flow of molten metal which enters into the mould cavity. It has four types depending upon its position.
A.) TOP GATE
It is the simplest type of gate. It takes the position of riser and the liquid molten metal enters directly to the cavity .Here velocity is high and turbulency is more.
So there is chance of erosion of the mould.
It takes less time to fill the cavity, so generally used for ferrous material because of its maximum shrinkage.
It is used for minimum depth and more wide type.
At the same time it provide directional solidification.
# The molten metal in the cavity must solidify before the solidification of molten metal in the riser.This is called directional solidification. 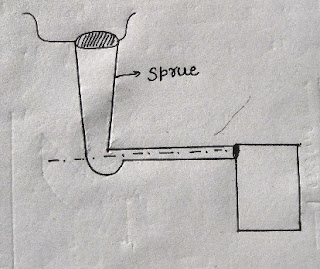 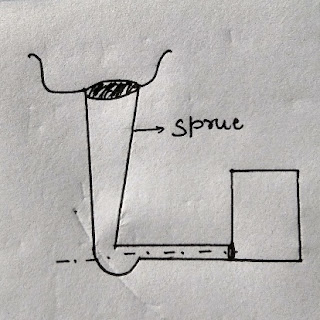 C.) PARTING GATE
Here gate is provided along the parting line.
It is mostly used gate because it has advantage of both top and bottom gate.
Portion A is filled like bottom gate and portion B is filled like top gate ( see fig. below). 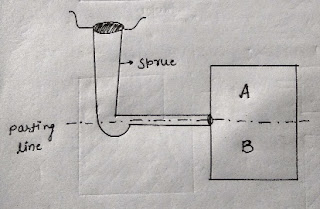 Here we get directional solidification as well as less turbulency.
D.) STEP GATE
Here the molten metal is filled in different steps through different passage. See fig. below. 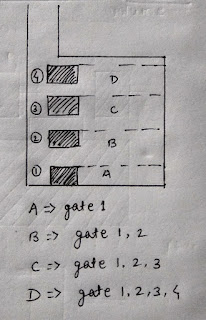 That was a detailed analysis of casting pattern materials and different terms of casting. Hope you all like this fresh content.
Some images used in mechanical talks is taken from the licensed photo section of Google. We are not taking any kind of credit for all those images
Spread the love