Sequence of operations in a cycle 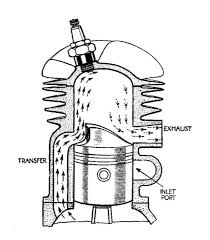 It is the process of increasing the mass (or in other words density) of the air fuel mixture ( in S.I. engine) or air (in C.I. engine) induced into the engine cylinder.
This is usually done with the help of a compressor or blower known as supercharger.
It has been experimentally found that the supercharging increases the power developed by the engine.
It is widely used in aircraft engines,as the mass of air sucked in the engine cylinder decreases at very high altitudes.This happens because atmospheric pressure decreases with the increase in altitude.
Following are the objects of supercharging in I.C. engines:
1.) To reduce mass of engine per brake power ( as required in aircraft engines).
2.) To maintain power of aircraft engines at high altitudes where less oxygen is available for combustion.
3.) To reduce space occupied by the engine
(as required in marine engines).
4.) To reduce consumption of lubricating oil.
5.) To increase the power output of an engine when greater power is required ( as required in racing cars).

Lubrication means to smoothen the machine parts with some agents.
The lubrication of I.C. engine has the following advantages:
1.) It reduces wear and tear of the moving parts.
2.) It damps down the vibrations of the engine.
3.) It dissipates the heat generated from the moving parts due to friction.
4.) It cleans the moving parts.
5.) It makes the piston gas tight.

The process of providing any arrangement, which will keep the engine speed constant
(according to changing load conditions) is known as governing of I.C. engines.
Though there are many different methods of governing of I.C. engines,we will discuss most important of them.
1.) Hit and miss governing-
In this system of governing,whenever the engine starts running at higher speed ( due to decreased load),some explosions are omitted or missed.This is done with the help of centrifugal governor.This method of governing is widely used of I.C. engines of smaller capacity or gas engines.
2.) Qualitative governing-
In this system of governing,a control valve is fitted in the fuel delivery pipe, which control the quantity of fuel to be mixed in the charge.The movement of control valve is regulated by the centrifugal governor through rack and pinion arrangement.
3.) Quantitative governing-
In this system of governing,the quality of charge (i.e. air fuel ratio of mixture) is kept constant.But the quantity of mixture supplied to the engine cylinder is varied by means of a throttle valve which is regulated by the centrifugal governor through rack and pinion arrangement.
4.) Combination system of governing-
In this system of governing,the qualitative and quantitative methods of governing are combined together.
Carburettor
Carburettor is only used in S.I. engine or petrol engine.
The carburettor is device for atomising and vaporising the fuel and mixing it with the air in the varying proportions to suit the changing operating conditions of the engine.
The process of breaking up and mixing the fuel with the air is called ‘carburetion’.
*Atomisation is the mechanical breaking up of the liquid fuel into small particles so that every minute particle of the fuel is surrounded by air.
* Vaporisation is a change of state of fuel from a liquid to vapour. 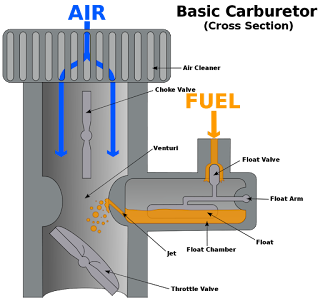 Spark plug
It is also used only in petrol engines.
A spark plug is a device used to produce spark for igniting the charge of petrol engines.
It is always screwed into the cylinder head.
It is usually designed to withstand a pressure upto 35 bars and operate under a current of 10,000 to 30,0000 volts.
The spark plug is kept from 0.3 to 0.7 mm. 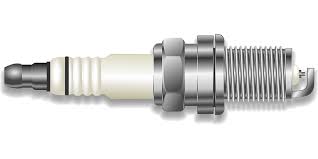 The loud pulsating noise heard within the engine cylinder of an I.C. engine is known as detonation.It is also known as knocking or pinking.
It is caused due to propagation of high speed pressure wave created by the auto- ignition of end of unburnt fuel.The blow of this Pressure wave may be of sufficient strength to break the piston.
Thus the detonation is harmful to the engine and must be avoided.
The following are certain factors which causes detonation:
1.) The shape of combustion chamber.
2.) The relative position of the sparking plugs in case of petrol engines.
3.) The chemical nature of the fuel.
4.) The initial temperature and pressure of the fuel.
5.) The rate of combustion of that portion of that fuel which is the first to ignite. This portion of the fuel in heating up, compresses the remaining unburnt fuel, thus producing the conditions for auto- ignition to occur.
NOTE- The detonation in petrol engines can be suppressed or reduced by the addition of small amount of lead ethide or ethyle fluid to the fuel.This is called doping.
The following are the chief effects due to detonation:
1.) A loud pulsating noise which may be accompanied by a vibration of the engine.
2.) An increase in the heat lost to the surface of the combustion chamber.
3.) An increase in carbon deposits.
That was all about the detailed explanation about internal combustion engine. Hope you all like this article. If this was helpful to you then share this article with your well wishers. If you have any doubts regarding this or any mechanical engineering topics then let us know in comment section or contact us through email.
Some images used in mechanical talks is taken from the licensed photo section of Google. We are not taking any kind of credit for all those images
Spread the love