Here are top 20 important MCQs of SOM  (Strength of material). Read the questions carefully and try to answer all of them from your own. 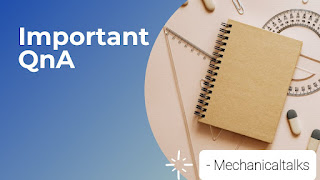 any one of these

Q4. When a body is subjected to two equal and opposite pushes, as a result of which the body tends to reduce its length, the stress and strain induced is compressive.
(a) True
(b) False

Q10. The ratio of linear stress to the linear strain is called
(a) modulus of rigidity
(b) bulk modulus
(c) modulus of elasticity
(d) Poisson’s ratio.

stress, pressure and modulus of rigidity

Q16. The ultimate tensile stress for mild steel is ___ the ultimate compressive stress.
(a) equal to
(b) less than
(c) more than.

Q17. The maximum stress produced in a bar of tapering section is at
(a) smaller end
(b) larger end
(c) middle
(d) anywhere.

their modulus of elasticities

Q19. The shear modulus of most materials with respect to the modulus of elasticity is
(a) equal to half
(b) less than half
(c) more than half
(d) none of these.

both rod and tube are under compression

bolt is under tension and tube is under compression

That was the set 1 of top important MCQs of SOM (Strength of material). This will help a lot for the competitive examinations. If you like this content then do share this with your well wishers. If you have any doubts regarding any mechanical engineering then let us know in comment section or contact us through email.