In IC engines, the chemical energy contained in the fuel is converted into mechanical power by burning (oxidizing) the fuel inside the combustion chamber of the engine. 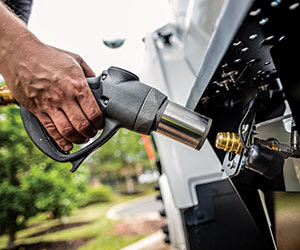 Liquid hydrocarbon
• Fuels used in IC engines are mainly mixtures of hydrocarbons, with bonds between carbon atoms and between hydrogen and carbon atoms.
• During combustion these bonds are broken and new bonds are formed with oxygen atoms, accompanied by the release of chemical energy. Principal products are carbon dioxide and water vapour.

Alkanes or Paraffins can in general be represented by all the carbon bonds are single bonds – they are “saturated” high number of H atoms, high heat content and low density (620 – 770 kg/m3).

The carbon atoms can be arranged as, a straight chain or as branched chain compounds.

• shorter the chain, stronger the bond
not suitable for SI engines – high tendancy for autoignition
• According to the value of “n” in the formula, they are in gaseous (1 to 4), liquid (5 to 15) or solid (>16) state.

when four or more C atoms are in a chain molecule it is possible to form isomers – they have the same chemical formula but different structures, which often leads to very different chemical properties.

• Also called cycloparaffins.
• saturated hydrocarbons which are arranged in a circle have stable structure and low tendancy to autoignite compared to alkanes (normal paraffins).
• can be used both in SI-engines and CI-engines
low heat content and high density (740 – 790 kg / m3).

• Also called olefins.
• have the same C-to-H ratio and the same general formula as naphthenes, their behavior and characteristics are entirely different.
• They are straight or branch chain compounds with one or more double bond.
• The position of the double bond is indicated by the number of first C atom to which it is attached, i.e.

• Aromatic hydrocarbons are so called because of their “aromatic” odor.
• They are based on a six-membered ring having three conjugated double bonds.
• Aromatic rings can be fused together to give polynuclear aromatics, PAN, also called polycyclic aromatic hydrocarbons, PAH
simplest member is benzene.

• Can be used in SI-engines, to increase the resistance to knock.
• Not suitable for CI-engines due to low cetene number.
• Low heat content and high density in the range 800 – 850 kg / m3.

• The OH group which replaces one of the H atoms in an alkane, gives these compounds their characteristic properties.

• Specific heating value is lower than gasoline (42 – 43 MJ/kg).
• methanol (19.7 MJ/kg) and ethanol (26.8 MJ/kg) for air-fuel mixture s.h.v. is comperable with gasoline (MJ/kg-mixture at stoichiometric mixtures).
• Other alcohol groups such as dihydric and trihydric alcohols are not used as a fuel in IC engines.

Also read : IC engine overview, petrol and diesel engine
Methanol
• can be obtained from natural gas – has near and long-term potential.
• has high octane quality (130 RON, 95 MON).
• can be used in low-concentration (5-15 %) in gasoline to increase octane number of the mixture.

poor solubility in gasoline, toxicity, low energy content (about half of gasoline), high latent heat of vaporization and oxygen content, contribute to poor driveability, incompatibility with some metals.
Ethanol
• produced from biomass
• has high octane number – can be used in low–concentrations in gasoline

• due to storage and transportation problems they are not widely used.
• reduce volumetric efficiency and power output of engine (5 – 10 %).
• have low tendancy to knock and low emissions.

• consists of propane and butane.
• provides good mixture with air – cleaner combustion.
• has excellent cold weather performance
low sulphur content.
• high octane number (propane 111 RON and 100 MON).
• lower density and lower heat content of LPG versus gasoline (23.5 MJ/liter for propane and 32 MJ/liter for gasoline).
• results a loss in fuel economy – but better combustion efficiency can reduce this loss.
That was all about different types of fuels used in internal combustion engine. Hope you all like this article and it should have clear all you doubts. If you have any questions related to this or any mechanical engineering topics then let us know in comment box below or feel free to contact us through email. If this was helpful to you then share this article to your friends.
Spread the love